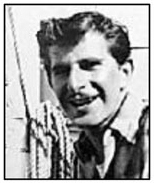 Born to Jack Bujacich and Winnifred Ross on April 29, 1925 in Eatonville, Washington George passed away at his home May 17, 2015 where he was surrounded by loved ones.  He was a proud navy Veteran of WWII serving aboard the U.S.S. Suwannee where he was a ships navigator.

George married Eileen Melissa Morey on February 7, 1948.  Together they had three children:  Cheryl Ann, George Jr. and Jane Moore (Dennis).  He was preceded in death by Eileen, his wife of 62 years, and sisters Mary Smith and Francis Borgert.  He is survived by brother, Jack Bujacich Jr. (Patricia) and sister, Patricia Linder (Chuck).  He leaves behing four grandchildren; Elias, Laird, Lola and Liam, along with numerous nieces and nephews.

George began his fishing career in his early teens fishing the Salmon Banks of the San Juan Islands at the Trap aboard his father’s boat, the Majestic.  He eventually would go on to run that boat for several seasons when his father became ill.  In the early 60s George had his own boat built, the Mustang.  He seined the waters of southeast Alaska, the San Juan Islands and locally in West Pass before selling the Mustang in the late 1980s.  George was one of the original board members of the Seiners Association.  Fishing was not just a vocation, but a way of life.  He was instrumental in the development of Donkey Creek Fish Hatchery in Gig Harbor, Washington.

One of George’s great passions was duck hunting in eastern Washington.  He was one of the founding members of Gig Harbor Sportsman’s Club and at his passing at the age of 90 was its oldest active member.

George always did things his way!  Halloween was a special event at the Bujacich home as George would greet the trick or treaters with a full wheelbarrow of candy, much to the chagrin of the parents.  The neighborhood will never be the same.