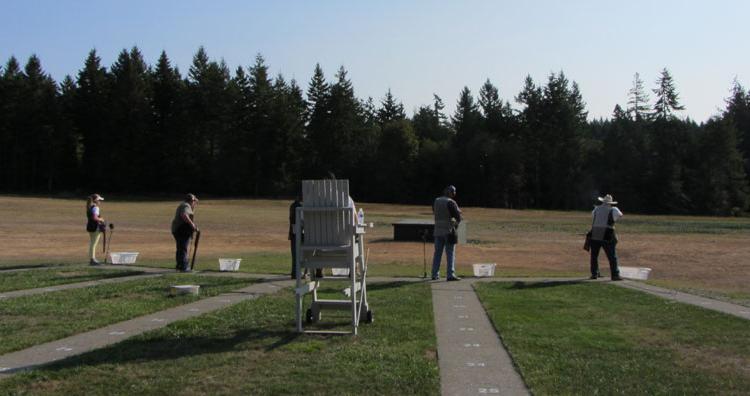 The Gig Harbor Sportsmans club offers American Trap, American Doubles Trap, and Continental Trap on Sundays between 12:00 PM and 4:00 PM and on Thursdays from 5:00 PM until 9:00 PM. As with other shooting venues at GHSC – trapshooting is open to the public. All trapshooting is supervised by a trained Range Safety Officer. All trap fields are equipped with automatic trap machines. The fee to shoot trap includes targets – there is no need to bring your own targets to the club. Hand throwing of targets is no longer allowed.

Trapshooting is one of the three major forms of clay target shooting. The others are Skeet and Sporting Clays. There are many versions of trapshooting, which include Standard American Trap, Doubles Trap, and Continental Trap.

In Standard American Trap a single target is thrown from a trap house 16 yards forward of where shooters stand for “Singles Trap”. All targets are thrown at the same elevation and speed – approximately 40 mph. The targets do however vary in horizontal position and are thrown randomly anywhere from 22 ½ degrees left to 22 ½ degrees right of the field centerline. “Handicap Trap” is a slight variation from Singles, wherein shooters are handicapped – based upon their ability – and shoot from a position further away from the trap house. As with other American Trap games, you only get one shot at each target – so load only one shell in the gun at a time for singles or handicap.

American Doubles Trap has many similarities to Singles Trap. All the targets are the same elevation, they are thrown at about the same speed, and the field width is still 22 ½ degrees left and right. In Doubles Trap, two targets are thrown simultaneously – but they are always thrown in the same horizontal position with respect to the trap house. Since there are two targets, you are allowed to load two shells at a time.

Continental Trap increases the difficulty of the game. Targets vary not only in horizontal position, but also in vertical position. The field width can be as wide as 45 degrees left and right of centerline, and targets are thrown faster at about 51 mph. Because continental targets represent more of a challenge, two shots are allowed for each target – therefore two shells may be loaded for each target. 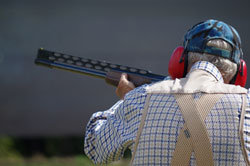 The complete list of Trap Range Rules is published on this website.   Please be familiar with them before coming to the range. To complete your understanding of the game, we’ll reiterate some of those rules here.

Trapshooting is for fun, but we all enjoy it much more when we score better. Shooters develop a personal discipline. That discipline is key to their success, and includes rhythm and concentration. Proper trapshooting etiquette involves avoiding behaviors that distract other shooters or the squad’s rhythm. Here are a few tips: