The following excerpts from the NCSA Official Rules and Regulations are provided for reference only. While GHSC 5-Stand has done everything possible to conform to these rules and regulations, if a disagreement exists, GHSC Range Safety Rules, Policies, and Procedures always take precedence.

(The following is copied from Chapter V. Official Rules and Regulation)

NSCA 5-STAND Sporting events consist of targets shot in 25 bird increments from five shooting stands with each shooter rotating from station to station. The game offers several skill levels and utilizes six or eight automatic traps to simulate game birds. Targets are release in a predetermined set sequence marked on a menu card in front of each shooting cage. Targets are registered separately under a special set of rules; however, they utilize the NSCA Classification system and all targets are included for total targets shot for the year. NSCA 5-STAND Sporting rules must be followed at all times while conducting this event. 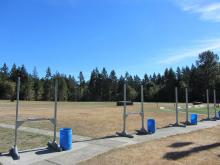 1.    Gun must be open and empty while changing stands.
2.    Shooters may not leave their station until instructed to do so by the referee/ Range Safety Officer or until the last shooter has fired his/her last shot.
3.    May only load gun while in shooting stand in ready position.
4.    Shooter’s feet must be behind the front opening of the shooting stand except when changing stands (applies to open front cages). Shooters will be warned, a NO-BIRD will be called, and continued disregard will result in losing a target or being disqualified.
5.    No chokes may be changed after the round has begun. Failure to comply will result in loss of targets attempted (in that round) after the choked changed.
6.    Target sequence cards must be posted.

NOTE: Chapter and numbers correspond with official Federation rules. The Federation may from time to time change or alter rules Parcours de Chasse (F.I.T.A.S.C.) or Compak during a NSCA shoot year. Should a material change of rule occur please take note that the Federation rules supersede the rules contained in the Parcours de Chasse (F.I.T.A.S.C.) And Compak sections of this rule book. Any material changes will be clearly posted on www.mynsca.com website and take effect upon posting.